*Disclaimer - the kids interrupted me approximately 3,052 times while writing this post so apologies in advance if it makes no sense

I wrote about this particular subject before, back when it first became a problem, and then felt so uncomfortable about having admitted to it publicly, that I swiftly deleted the post. It was the first and only time that's happened, and I wasn't proud of it. But here's the thing. The problem that I wrote about is still a problem. Facebook. Therapist. And the combination of the two.

I crave knowledge about her. It makes no sense, because every time I might possibly see just a glimpse of the person behind the Therapist mask, it makes me so intensely uncomfortable that I want to run a mile. It's the most bizarre contradiction - I want to know the real person, what goes on for her, speak to her as equals, yet I also need her to be perfect so that it's ok for me to burden her with my crazy. I've created a persona for her where she is a model of calm and serenity,witty, fun to be around, happily married, probably with a wonderfully well adjusted family. I compare myself relentlessly to that persona and without fail, come up wanting. Yet despite wanting one thing (knowledge), and having created another (persona), at the same time I have to find a way to persuade myself to accept that the former isn't possible, and the latter isn't real. I also have to accept that even though she isn't perfect, and she quite likely has plenty of stress of her own, she's still very good at her job and trained to help me. So, even though she might look tired, I have to work under the assumption that if she's in the room, she's 100% there for me, tired or otherwise. And of course, added to this is the fact that I'm constantly, constantly on the look out for even the tiniest visual cue as to what might really be going on for her and amending the persona accordingly.

Then, let's throw another spanner into the mix. Facebook. Therapist, like the vast majority of the rest of the world, is on facebook. How do I know? Because my need to know about her has reduced me to snooping around the interweb. Not my finest moment(s). Her privacy settings are to the max, and I can see nothing personal about her, but does that stop me looking? No, it does not. The worse I feel, the more often I check, just in case something, anything, might have changed. It rarely does, and really, what can you learn about someone from a facebook profile picture?? Absolutely nothing. 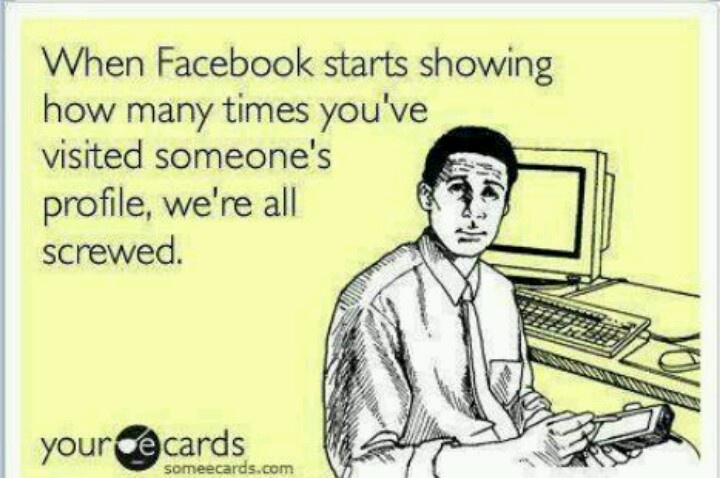 We've talked about it so many times. I know why I do it. She knows why I do it, and is ok with that. I'm not, I hate it. I find the gap between sessions really hard, and I find long gaps during holidays even harder. The less contact I'm able to have with her, the more I want. Facebook gives me nothing, but at the same time, it reassures me on some level that she's still there. It feels like some kind of connection, however insignificant. In reality, it's no connection at all, and when I'm feeling bad, it's like a form of emotional self harm. It's the tiniest glimpse of what I want, but nowhere near enough.

We've talked about whether or not she should block me, we tried it briefly. It didn't help all that much, and at times that I feel particularly needy, it triggered a horrible sense of abandonment and rejection - how could she cut me off like that? Completely irrational I know, but hey, bpd loves irrational. So I guess no more than any other disordered behaviour, I've got to try and get it under control. This one is particularly challenging. I'm trying, I really am. On good days it's ok. On bad days? I'll leave you to figure that one out.